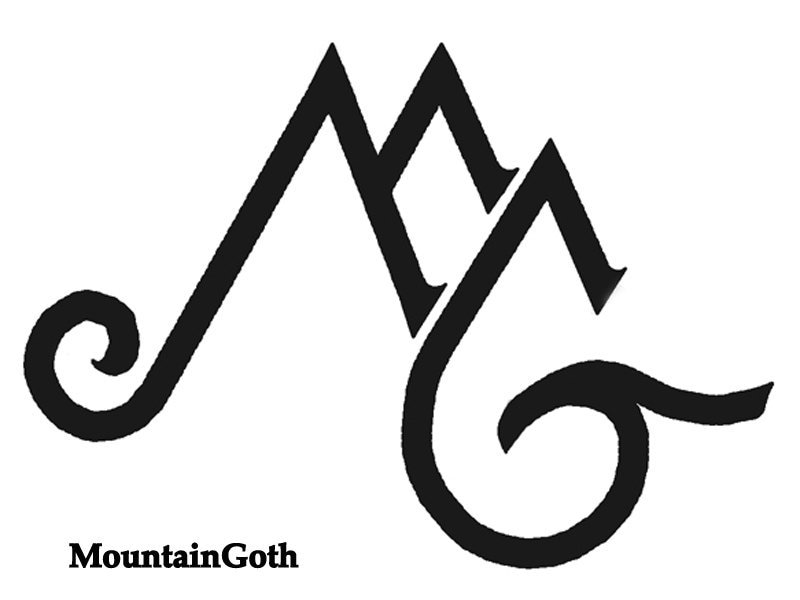 Where did MountainGoth come from?

I have this friend who was always telling, you should take a year off, as you have only so many years in your life.  Take one and just do what you want.  So, after having worked in the high-tech industry for over 20 years,  I decided to take his sagely advice and take the year off.

OK, now what do I do with myself,  I decided I wanted to explore further the things I had always enjoyed doing.  One of which was making hats.  I started making hats while still in school.  These were mostly crocheted hats in different shapes and forms usually freeform, rather than following commercial patterns out there.  So I got some yarn and started hooking away a couple of hundred hats.  Much to my surprise, people started buying these pieces.

About this time, Mr. MountainGoth and I decided to buy a house up in the White Mountains of New Hampshire.  We bought just outside of Littleton.  Littleton is a very funky little town, and if you are on a road trip, you should stop and checkout Main St.  It's full of Artisan and Vintage shops and it's also known as a Foodie town.

Shortly there after, we went out to a restaurant (no longer around) that was the most Goth place I'd ever been.  The staff was all goth, it was really cool, the whole area has a gothish vibe.  As we were discussing it, I said, they are just "Mountain Goths" and right then I knew I had found the name of my business.  Ok, I've digressed, back to hats.

So I'm halfway through my year off, I've opened a shop on Etsy and selling my crocheted hats.  A couple of the crocheted hats I had made were red gnome hats.  I had 3 of these up for sale and it's late August and I'm like wow, people are digging the gnomes, but they really would be better if they were a sewn hat.  So I run to the fabric store and get the makings and pull out my sewing machine and post a few gnome hats.  Bam....  People are just snatching them up.

I had made a couple of jester hats for costumes a couple of years before that, so I figured, why not try posting a few of those.  Again, people were picking them up.

From there, more sewn hats, decided to get serious, took some classes at Boston University, The Elliot School and The Hat Academy.  I continue to add to the hats I make and types of hats.  When the year was up, decided, my future was in hats and left the high-tech world forever.

Will add more about other hats, materials and techniques in future entries.

Thanks for reading my little story.

Next Post Coming soon Jester Hoods
0 items in your cart